The Kingsmen "Thank You for your donation"

Thank you for your donation

For more than a half a century, no group has secured such a far reaching legacy like that of The Kingsmen Quartet. Since 1956, this group has risen from humble beginnings in the mountains of western North Carolina to one of the most beloved and innovative groups in Christian music. Countless renowned artists have been a part of this great lineage, eight of which have been inducted into the Southern Gospel Music Hall of Fame; such as Eldridge Fox, “Big” Jim Hamill, Ray Dean Reese, Squire Parsons, Anthony Burger, Martin Cook, Mark Trammell, & Ernie Phillips. The momentum has not stopped as this group continues to help define the Southern Gospel genre for a whole new generation of music lovers, perhaps more so than any other group.

In the mid-fifties, brothers Raymond, Reese, and Louis McKinney formed a gospel group, traveling locally throughout the western part of the Carolinas and completing dozens of recordings by the late 60’s. By the early 70’s, area natives Eldridge Fox and Ray Dean Reese joined this emerging quartet and in 1974 released their first live recording, “Big & Live” consisting of Fox, Reese, Jim Hamill, and Johnny Parrack. This Dove award winning album brought to gospel music, fresh arrangements and catchy melodies that would later become southern gospel classics, such as “Glory Road”, “Look for Me At Jesus Feet”, and “Love Lifted Me”. This would be the start of many legendary live albums for the Kingsmen. Traveling with a live band, the Kingsmen became one of few groups during this era to be able to perform with three to five musicians, granting them individuality and innovation in the industry. 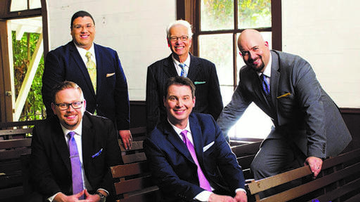